Compendium of Continuing Education in Dentistry

You must be signed in to read the rest of this article.

Registration on CDEWorld is free. You may also login to CDEWorld with your DentalAegis.com account.

Endosseous osseointegrated dental implants have added significant and predictable treatment options that previously were unavailable for patients and clinicians.1-4 The original dental implant treatment protocol, with machined-surface, commercially pure titanium implants, was developed for use in the mandibles of edentulous patients because these patients traditionally had the most difficulty adapting to complete dentures. Screw-retained implant prostheses for mandibular edentulous patients generally consisted of cast-metal frameworks with machined cylinders incorporated into the castings. The cylinders/frameworks were screwed into abutments that had been screwed into osseointegrated dental implants (Figure 1). The precisely machined interfaces between abutments and cylinders were maintained through careful, meticulous procedures throughout the casting process (Figure 2). One of the major advantages associated with screw-retained prostheses was retrievability. However, there were numerous reports of screw loosening and/or screw fracture, along with other prosthetic complications5-7 (Figure 3).

With the increase in implant restorative components, choosing the most appropriate abutment for a given clinical situation may be more difficult and confusing for some dental professionals. This article describes a clinical/laboratory protocol for predictable, optimal abutment selection in implant dentistry for implant surgeons, restorative dentists, and dental laboratory technicians.

Definitive abutment selection may be accomplished by implant surgeons, restorative dentists, and/or dental laboratory technicians; it may be accomplished clinically or in the dental laboratory if an implant-level impression has been made. Definitive abutments for partially edentulous patients consist of two basic types: stock and custom-designed. There are benefits and limitations associated with both abutment types (Table 1). Ideally, abutment selection should be accomplished in the original treatment planning sessions among the team members because the type of abutment planned may have an impact on the surgical placement of the proposed implant, as well as the expense associated with a particular abutment design. Because the costs to purchase and fabricate premachined and custom-designed abutments are significantly different, it is important for clinicians to know in advance, if at all possible, which abutment is planned so the appropriate fee can be decided upon and presented to patients.

Abutment selection can be accomplished for any implant system by using the following six criteria: type of implant-abutment connection, implant restorative platform, emergence profile of healing/interim abutment, orientation of implant(s), interocclusal distance, and depth of the peri-implant soft tissues.

Implant-abutment connections may be described as internal or external connections. Both connection types have had long-term clinical success.9-12 For instance, in one implant system (OSSEOTITE® Certain® Implant System, Biomet 3i, www.biomet3i.com), the length of the implant-abutment internal connection is 4 mm, and the implant-abutment connection features two antirotational components, a six-point hex at the occlusal aspect of the connection, and a 12-point hex deeper within the connection (Figure 7). This same implant company also manufactures external hex implants with different implant restorative platforms (4.1 mm, 5 mm, and 6 mm in diameter). However, the external hexes of each of these restorative platforms have the same dimensions and measure 0.7 mm in height and 2.7 mm from one flat surface of the external hex to the flat surface directly opposite (Figure 8). Both implant-abutment connections have proven to be predictable and long-lasting in clinical practice; clinicians generally make this decision based on personal preferences.

Berglundh and Lindhe investigated the biologic width in the peri-implant tissues in beagle dogs.15 They concluded that a minimum width of approximately 3 mm of peri-implant mucosa was required to create a soft-tissue barrier around dental implants and, with crestal bone resorption, allowed a protective dimension of soft tissue around implants. The dental implant literature contains references describing 1-year bone postocclusal loading bone levels as typically being located approximately 1.5 mm to 2 mm apical to the abutment-implant interface. However, crestal bone levels also are known to be dependent on the location of the abutment-implant interface relative to the crestal bone.16-18

“Platform switching” has been defined as attaching restorative components with slightly smaller restorative platforms (diameter) onto dental implants, ie, a 4-mm diameter abutment on top of a 5-mm diameter implant.14 Lazzara and Porter reported, over a 13-year observational period of platform-switched restorative components, that crestal bone loss was not greater than the amount expected with conventionally matched restorative and implant components.14 Grunder et al also reported that platform switching seemed to be a promising strategy to reduce or eliminate bone loss around dental implants.19

In areas where optimal esthetics are required, such as in anterior maxillae in patients with high lip lines, interim or provisional abutments may be used to contour the peri-implant soft tissues and to develop optimal, anatomic emergence profiles and soft-tissue contours consistent with the contours of natural teeth (Figure 12). In the case pictured, a plastic interim abutment and provisional crown were used to develop the anatomic peri-implant soft-tissue contours surrounding the missing maxillary right central incisor. The implant was placed and a nonocclusal loading protocol was followed to provide an immediate provisional crown.20 The interim abutment was placed on the implant and the gingival margins were marked on the abutment; the abutment was removed and prepared outside of the patient’s mouth. Extraoral abutment preparation eliminated the trauma, vibrations, and/or micromovement of the implant associated with intraoral abutment preparation. In a case in which conventional implant placement has occurred previously and osseointegration has taken place, intraoral abutment preparation would be clinically acceptable. A custom-designed abutment and cement-retained crown was the treatment of choice for the definitive restoration (Table 2). 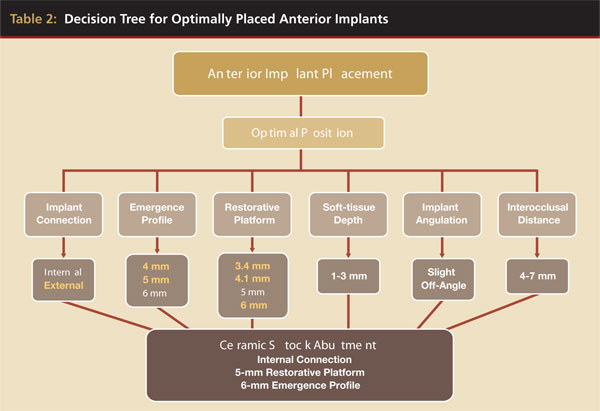 This criterion is particularly important in deciding whether implant restorations will be cement- or screw-retained. The main advantage of screw-retained restorations is that if a situation arises in which a restoration needs to be removed for repair, the restoration and/or abutment may be unscrewed, repaired, and reinserted (Figure 13). However, screw access openings may interfere with esthetics and/or function.

Implants may be malpositioned in the vertical, mesial/distal, and/or facial/lingual planes. In the authors’ opinion, malpositioned implants are probably the most common reason for using custom-designed abutments (Figure 14, Table 3). However, if implants were placed consistent with the planned location of the teeth, premachined straight or preangled abutments may be used with predictable results and at less cost (Figure 15A and Figure 15B). 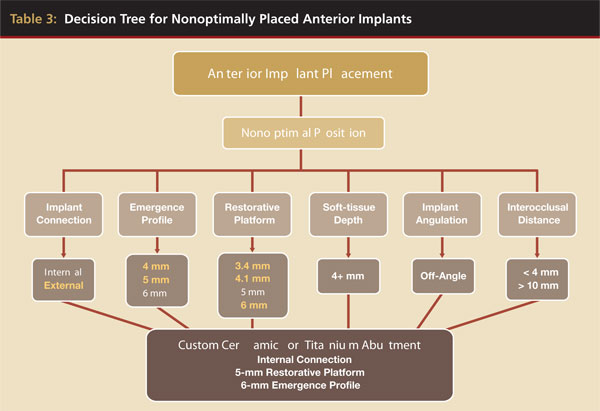 Saab and colleages studied the effect of abutment angulation on bone strain by measuring and comparing the strain distribution on bone around an implant in the anterior maxilla using two different abutments by means of finite element analysis.21 They reported that their model predicted a 15% higher maximal bone strain for a straight abutment compared with the angled abutment. They also reported that most of the strain produced on the cancellous and cortical bone was within the range that has been reported to increase bone mass and mineralization.

Hsu and colleagues reported on the results of a premaxillary finite element model that featured an implant and its restoration. Six different testing conditions incorporating two types of cancellous bone (high-density and low-density) under three different loading angles (0°, 30°, and 60°) relative to the long axis of the implant were applied to investigate resultant stress/strain distribution.22 Hsu et al reported that for each 30° increase in loading angle, the maximal equivalent stress in cortical bone increased, on average, three to four times compared with that of the applied axial load. They concluded that for implants to achieve a favorable prognosis under off-axis loading of anterior maxillary implants, careful case selection for appropriate bone quality and precise occlusal adjustment should be accomplished. This would direct occlusal forces optimally toward the long axis of implants. Lin and colleagues performed finite element analysis on two different implant systems with straight and 20° angled abutments.23 They also reported that better stress/strain distribution is possible when abutments are placed along the long axis of implant loading with multiple areas of cortical contact. The literature is replete with reports regarding abutment angulation and stresses to screws and peri-implant bone; however, no papers were identified regarding clinical failure rates associated with angled abutments. From the noted citations, it appears that implants theoretically have better prognoses when they are loaded axially and angled abutments should be used with caution.

Interocclusal distance is the next criterion in the abutment selection process. Premachined abutments generally can be used if the distance from the implant restorative platform to the occlusal surfaces of the opposing dentition is between 5 mm and 9 mm. If after occlusal reduction of the abutment and, potentially, the opposing dentition, the interocclusal distance is less than 6 mm, the abutment axial walls may be no longer than 4 mm. However, 4-mm axial walls may not provide adequate retention and resistance form for predictable cementation of cement-retained implant crowns because axial wall removal of implant abutments has been shown to affect the retention of cement-retained abutments negatively.24 In the case pictured, a one-piece custom abutment (UCLA abutment) for a screw-retained crown was the treatment of choice for the distal implant as the abutment was waxed and cast as a coping consistent with the design of a porcelain-bonded-to-metal crown restoration (Figure 16, Table 4). 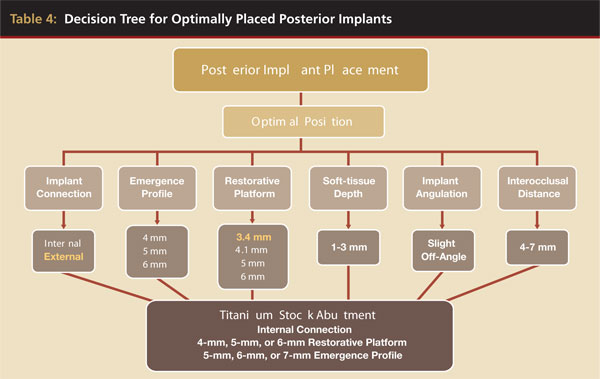 If the interocclusal distance is greater than 10 mm, even without occlusal reduction, a premachined metal abutment may not be tall enough to provide optimal retention and resistance form for predictable cementation of an implant crown. In this case, a custom-designed abutment would be the treatment of choice because the custom abutment could be designed with near-parallel axial walls and the requisite 2-mm interocclusal reduction (Figure 17).

6. Depth of the Peri-implant Soft Tissues

To perform abutment selection in the laboratory, implant-level impressions are required to fabricate master casts with implant analogs. It is the authors’ preference to select abutments in the laboratory to minimize the chance for selecting incorrect abutments. Implant-level impressions are predictable and relatively straightforward when the peri-implant tissues are less than 4 mm. Well-designed and well-fitting anatomically shaped healing abutments and/or custom provisional restorations expand the peri-implant soft tissues and provide access to the entire implant restorative platforms (Figure 18). However, the converse is also true: If the peri-implant soft-tissue depth is greater than 4 mm, implant-level impressions may be difficult to obtain because the soft tissues may collapse and obscure the implant restorative platforms (Figure 19). In areas without esthetic concerns, it may be beneficial to place abutments onto the implant restorative platforms and, in effect, raise the level of the restorative platforms (Figure 20A and Figure 20B, Table 5). 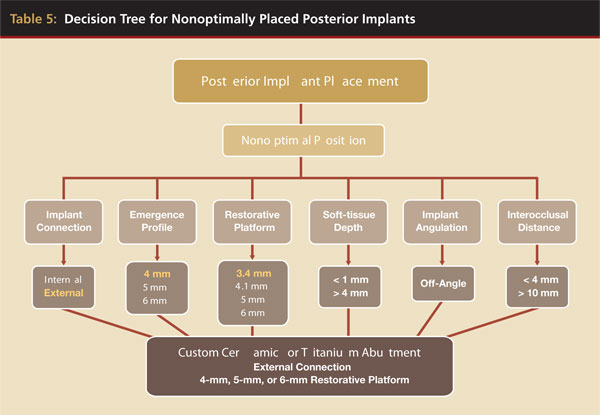 Clinical implant dentistry now offers patients predictable, esthetic, and functional long-term restorations. Among implant manufacturers, there are numerous implant restorative components for virtually all clinical situations. Abutment selection is but one step in the process of successful clinical treatment with implant restorations. This article presented a six-step protocol, with clinical examples, for abutment selection in partially edentulous patients. The protocol was presented in a generic format, so that clinicians may use it with any implant system. As technology and biomedical science improve and modify implant components and protocols, the points developed in this article should provide clinicians and dental laboratory technicians with the ability to choose implant abutments in virtually any clinical situation.

Dr. Drago is the Director of Dental Research, Biomet 3i. Dr. Lazzara was an officer of Implant Innovations Inc, 3i.

After reading this article, the reader should be able to:

The author reports no conflicts of interest associated with this work.

Queries for the author may be directed to jromano@aegiscomm.com.